This is a recipe for how to make Paneer, a cottage cheese from the Indian subcontinent used in traditional dishes such as Palak Paneer (Spinach Curry). It’s far superior to store-bought with a much softer, creamier texture.

Super-easy to make, and so very satisfying!

Paneer is a fresh cheese that is a common ingredient used in northern Indian (as well as other nearby countries’) cooking. Perhaps most well known is Palak Paneer, the iconic green spinach curry served with golden pan-fried paneer!

These days, you can buy paneer at large grocery stores in Australia such as Coles and Woolworths. But it’s much harder in texture and not a great product. Homemade is far superior – it’s softer and creamier.

Besides, it’s such a cinch to make and lasts for a couple of weeks in the fridge. So why wouldn’t you just make your own??

Paneer is a fresh cheese so it’s somewhat similar to other fresh cheeses like ricotta, quark and cottage cheese. It’s got a milky flavour and a lovely texture a bit like firm ricotta. It’s not as creamy as say a brie, because it doesn’t have anywhere near the same amount of fat.

Paneer is unsalted so it’s quite bland if eaten plain. For Indian cooking, it’s intended to be eaten with flavourful sauces or spicing – like the Spinach Curry sauce pictured below for Palak Paneer!

What you need for homemade paneer

All you need is milk, and lemon juice or vinegar. Gee, I wish more recipes on my website called for just 2 ingredients! 😂

Milk not curdling? Turn the stove back on and bring the milk to a boil again, just until it starts separating. Then turn the stove off and keep stirring.

How to cook and use paneer

Paneer is typically cut into small bite-size pieces, either cubes or rectangles. Then they are either:

It will come as no surprise to anyone that I prefer the latter. Because, as I always say, browning = flavour!! The paneer looks irresistible when it’s crispy and golden on the outside. You just want to eat it straight out of the pan. You really will. I do!

But there’s a wide variety of other Indian dishes that use paneer, both savoury main dishes as well as desserts and snacks.

It’s also common to substitute paneer for meat in some dishes, as it makes a great vegetarian alternative that’s equally filling and satisfying. Here are a couple of curry recipes I’ve previously shared that can be made vegetarian by switching the meat with paneer: 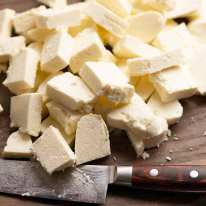 Author: Nagi
Prep: 10 mins
Cook: 10 hrs
Setting: 4 hrs
Mains
Indian
4.92 from 12 votes
Servings4 – 6 people
Tap or hover to scale
Print
Recipe video above. Homemade paneer is far superior to store bought. It's softer and creamier, and has much better flavour. It's easy to make, without special equipment. All it takes is a little patience to let the cheese set in the fridge for 4 hours. Use paneer to make the great Indian classic, Palak Paneer (Spinach Curry with Paneer)

1. Cheesecloth – Thin loose-woven cotton fabric used in cheesemaking and other cooking for straining. Sold at fabric stores and some kitchenware stores. It can be as cheap as $3 per metre. Alternatives: Clean blue Chux wipes (yes, really!); old thin handkerchiefs used in a single layer; 2 layers of good-quality paper towels (not cheap stuff, they just disintegrate). Standard tea towels won’t work, they are too thick for the liquid to drain out. 2. If you leave it in longer, the cheese will become firmer and can be more crumbly to cut because the weight continues to press liquid out. So try to stick to 4 to 5 hours for the time the paneer is in the fridge with the weights on. Your paneer will be nice and soft, like we want!

Weekend teeth inspection. I always think he has disproportionally small teeth for a dog that big!!

END_OF_DOCUMENT_TOKEN_TO_BE_REPLACED

I believe you can make great food with everyday ingredients even if you’re short on time and cost conscious. You just need to cook clever and get creative! END_OF_DOCUMENT_TOKEN_TO_BE_REPLACED