Homemade wonton soup! These wontons are filled with a juicy pork and prawn / shrimp filling and will knock your socks off. With step by step photos and a recipe video, you’re going to be a Wonton Wrapping Master in no time!

This wonton recipe was originally published in September 2016. Updated for housekeeping matters in 2018 – no change to recipe! 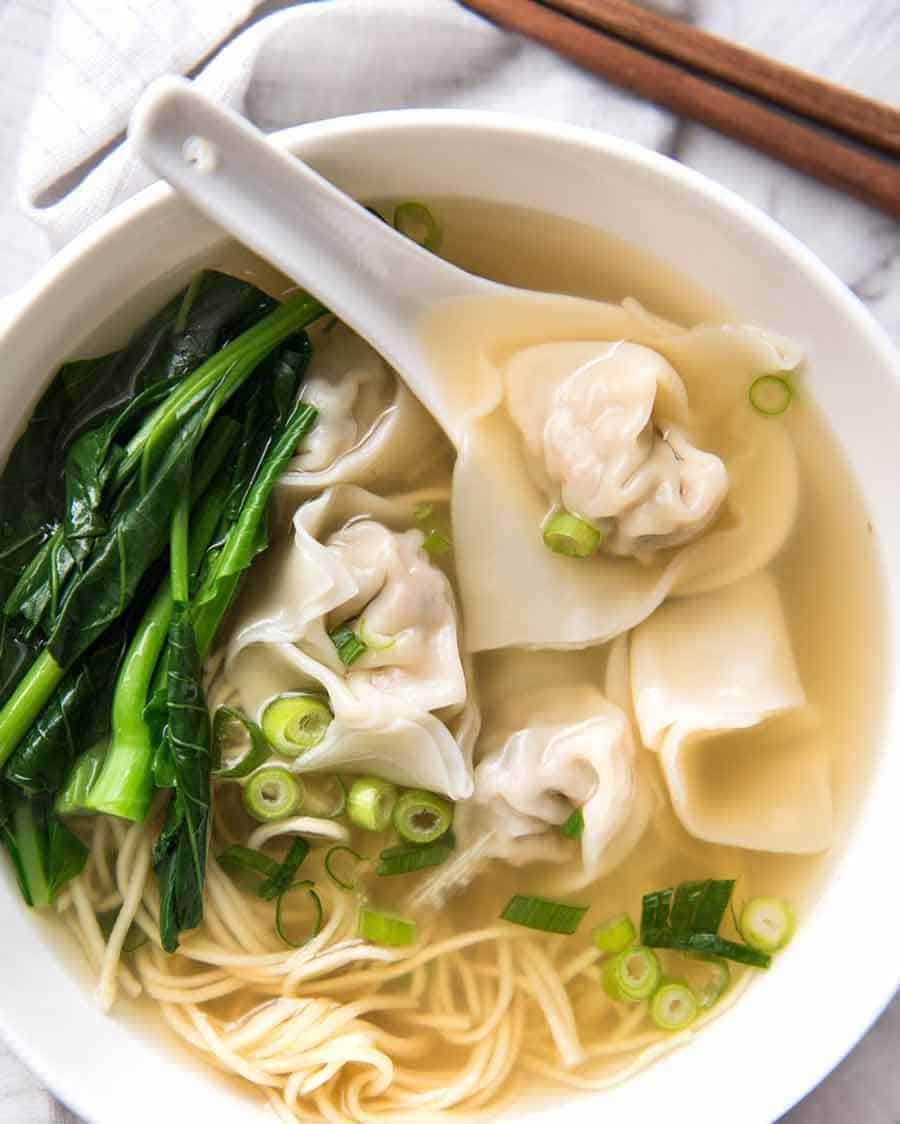 If you’ve ever had store bought frozen wontons or wontons from a good value Chinese place that probably uses frozen wontons, you will be amazed how different homemade ones are. The main difference is the texture of the filling – because homemade wontons are made with just pure fresh ingredients, NO mysterious fillers!

I think wontons are one of those things that many people don’t think to make, assuming they are really tedious and take ages. But they don’t!! The wonton filling takes minutes to make (literally – 5 minutes) and wrapping the wontons is quite fast if you use my method! 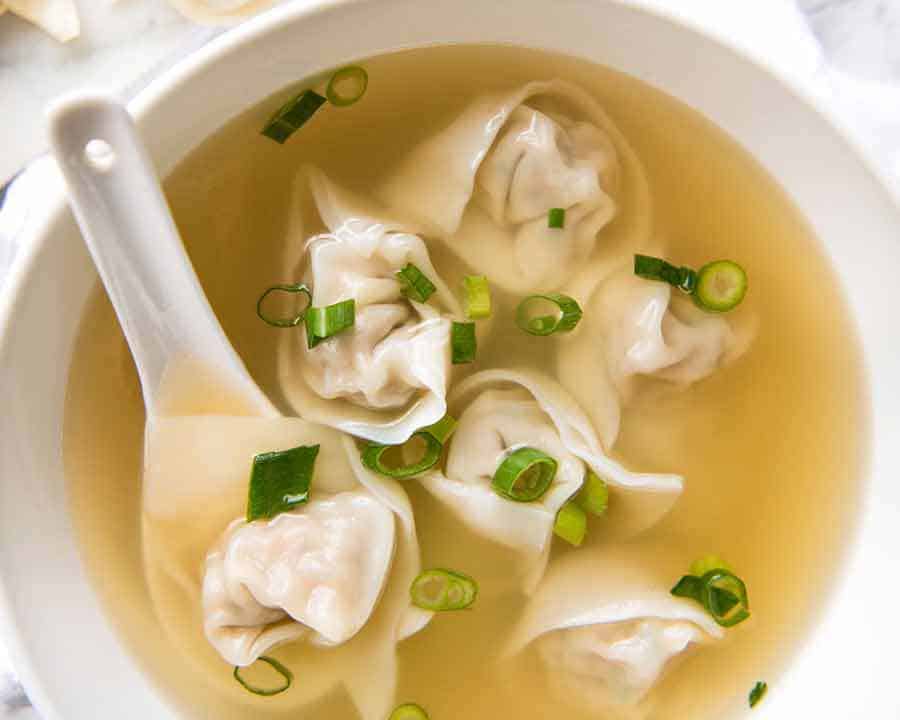 About this Wonton recipe

I used to use my mother’s Wonton recipe, because it’s the one I have used all my cooking life. Then a few years ago, I came across this Wonton Soup recipe by my friend Maggie from Omnivore’s Cookbook, a wonderful authentic Chinese food blog.

I’ve learnt so much about authentic Chinese cooking from Maggie who was born and raised in China and only recently moved to the States. She takes such great care with her recipes, if you love Chinese food, I think you’ll be as delighted to discover her blog as I was. 🙂

So I think my mother was a bit disgruntled when I told her I was using Maggie’s Wonton filling for this post because it’s better than hers. I sent her away with samples, and she agreed that Maggie’s Wontons are fantastic, but didn’t admit it was better.

It IS better. Sorry mum! Maggie’s has better seasoning! 😉 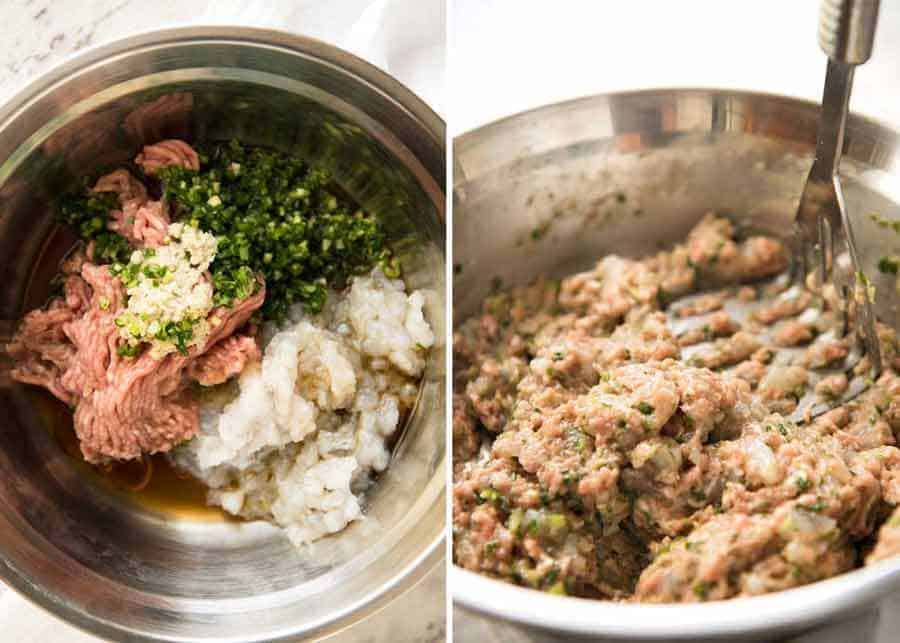 There are many types of wonton fillings, but I’d say that pork and shrimp/prawns are the most common. Then there are all sorts of additions, including mushrooms, water chestnuts, chopped up Asian greens and even carrots.

With all the possible variations out there, and not knowing which recipes are actually “real”, you can be confident that this is authentic because I have used Maggie’s recipe exactly as it is written.

This is where Maggie and I differ. If you click over to Maggie’s recipe, you will see that she uses trapezium shaped wontons wrappers (I had to Google that!!!). I use plain square ones because they are readily available here in Australia, even in supermarkets (Woolies, Coles). Once cooked, they look pretty similar.

So here is how I wrap wontons. This is a fast way of wrapping wontons because you can  lay out 10, even 20, and do them all in one go, rather than doing them one by one, because they are wrapped on the work surface rather than in your hand.

My Way of Wrapping Wontons 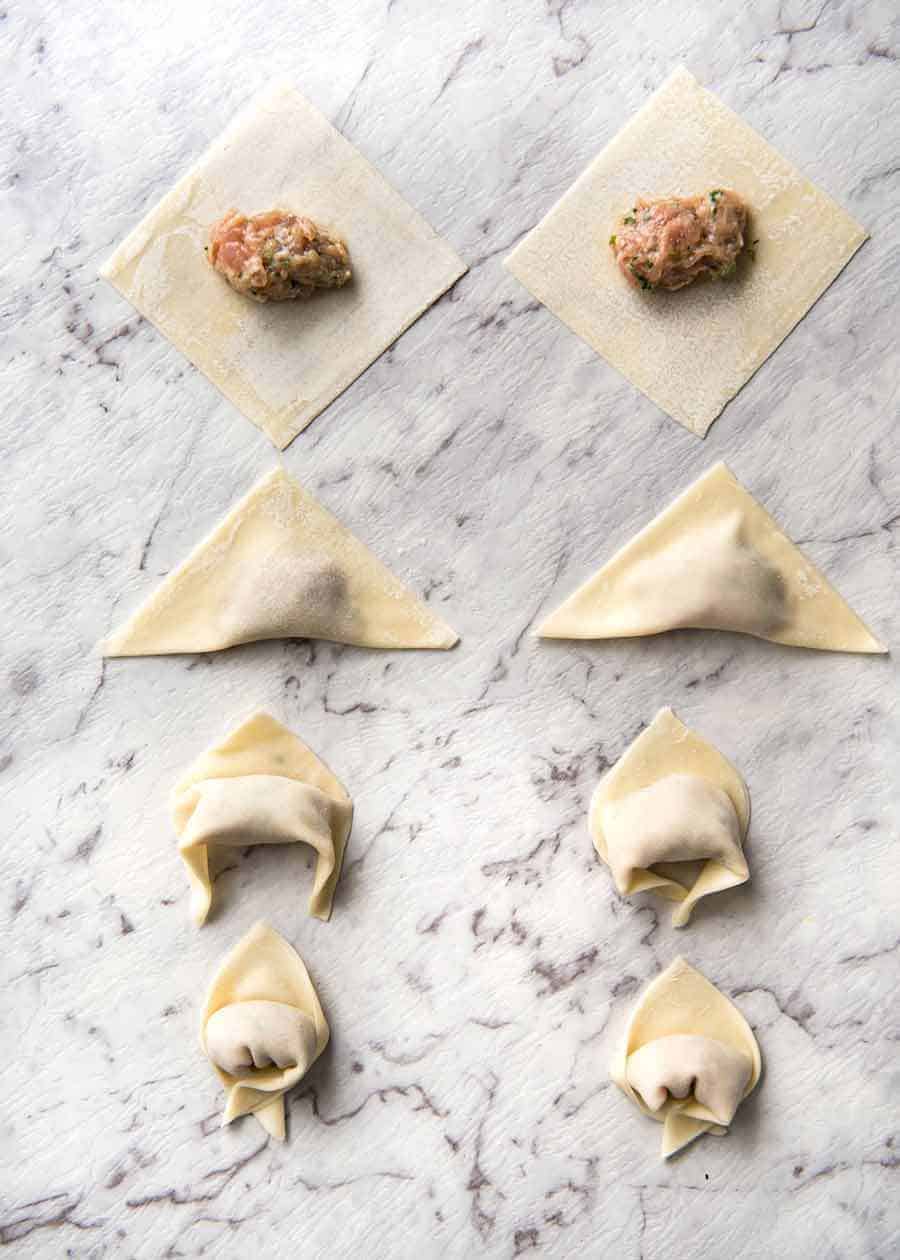 The above is the way I usually fold wontons because I like the way the “tails” flap around like noodles once cooked. Yes, I’m a 7 year old at heart.

But to me, the flappy wonton skins are part of the Wonton Soup experience. 😂

However, when I know I’m going to be freezing all or most of them, I wrap them in a more compact way so they fit better inside containers. This is the way the frozen wontons in Asian grocery stores are wrapped.

The photo on the bottom right is a container of frozen wontons I bought to show you how they are sold. Also so I could make some and smugly say how much better homemade is! 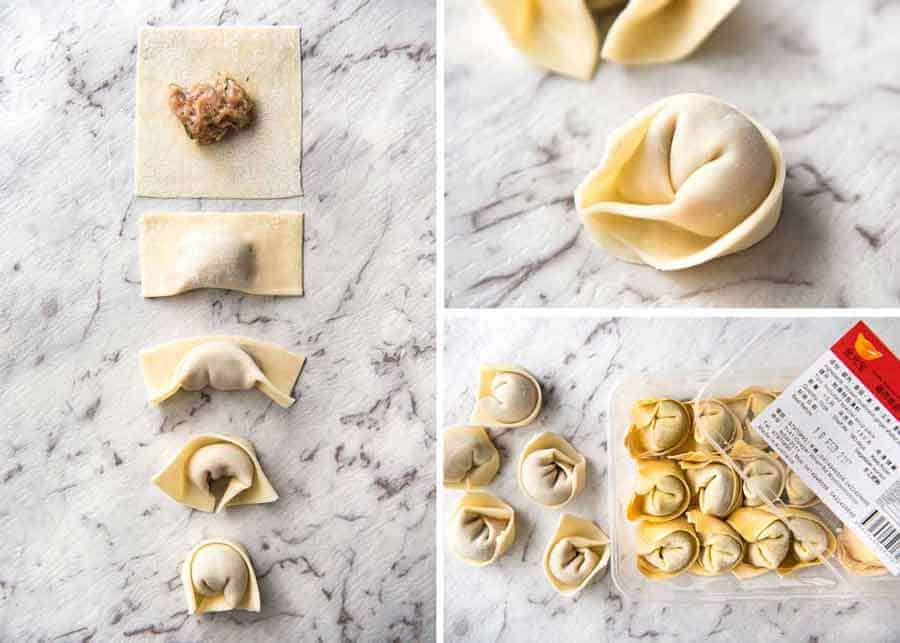 Both wonton wrapping methods are just as easy, and you can do them in batches rather than holding them one by one. But you can see how much more compact the Asian Grocery Store Way is compared to My Way in the photo below. The Wontons at the top are the compact Asian Grocery Way, the ones on the bottom are My Way with more flap page once cooked. 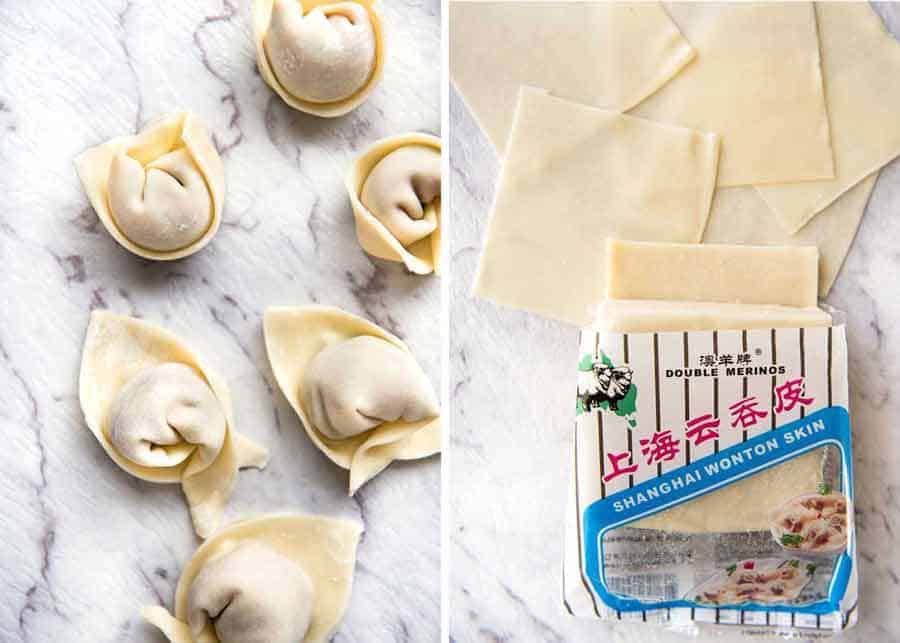 This is what mine looks like once cooked. See all that wonton wrapper flappage? YUM. 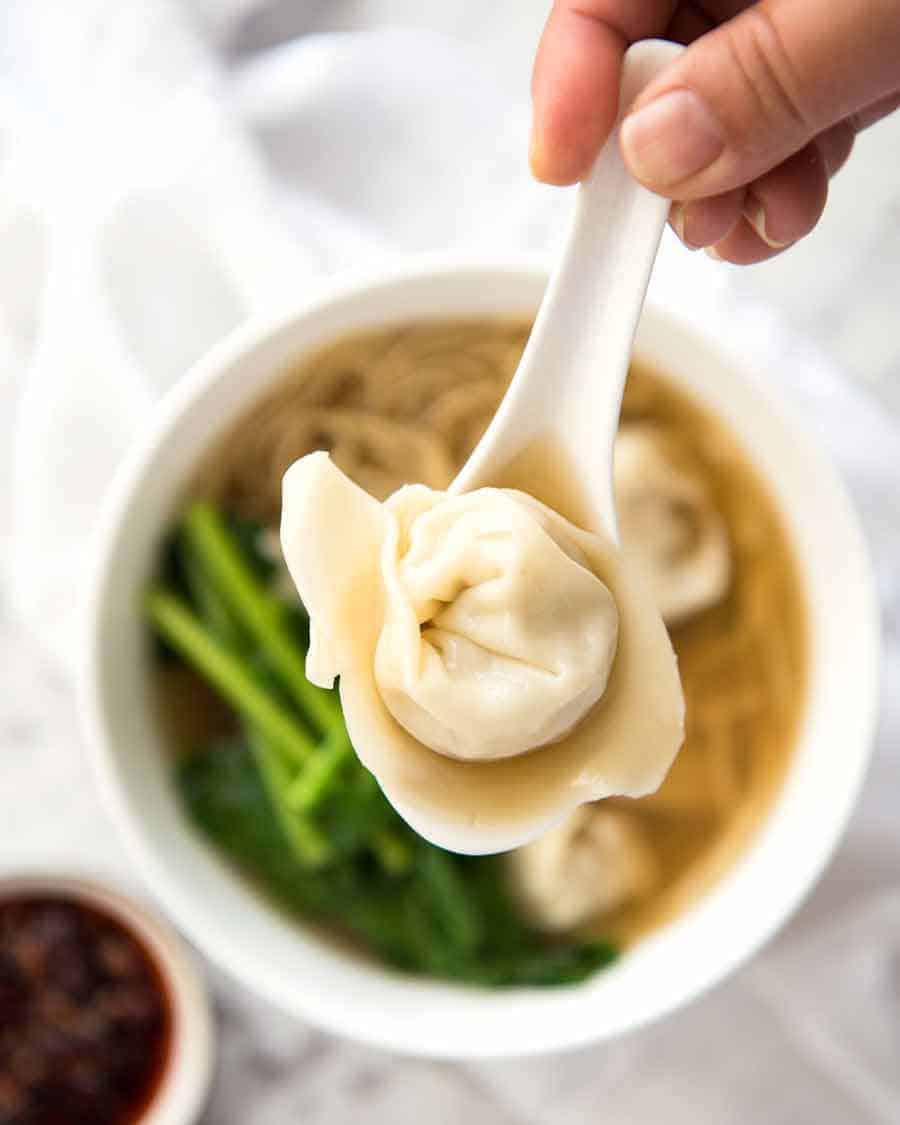 Don’t get too hung up about how neat your wontons are. Once cooked, they mostly lose their shape, so just make sure that your filling is well sealed inside. And even if the filling falls out, you still get the same flavour, so don’t fret!!!

Tip: As tempting as it is, do not bunch them up like a money bag otherwise you end up with a thick wad of wonton wrapper that won’t cook through.

If I am at an Asian store, I usually pick up Chinese chicken broth which is more yellow but just as tasty as Western chicken broth that is available at supermarkets. However, I usually make this with ordinary Chicken broth using the same soup broth recipe as my Chinese Noodle Soup. 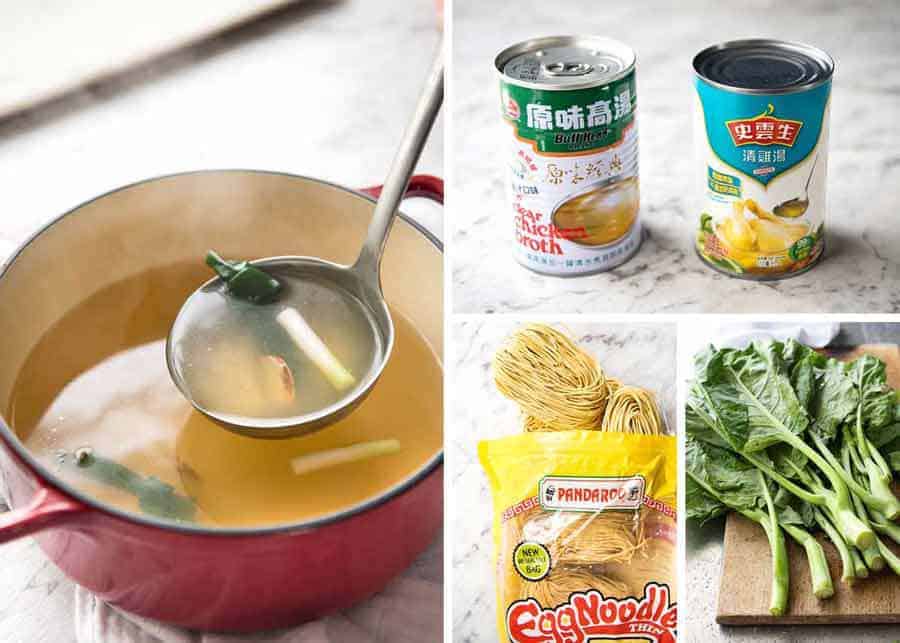 So….what do you think??? Have I convinced you to give homemade Wonton Soup a go? I promise it is WORTH IT! They taste absolutely incredible. You will be amazed!

PS Homemade wontons are so fantastic for standby meals to keep in your freezer because you can throw in whatever veggies you have and voila! You have a complete HEALTHY meal!

MORE GREAT DUMPLINGS OF THE WORLD 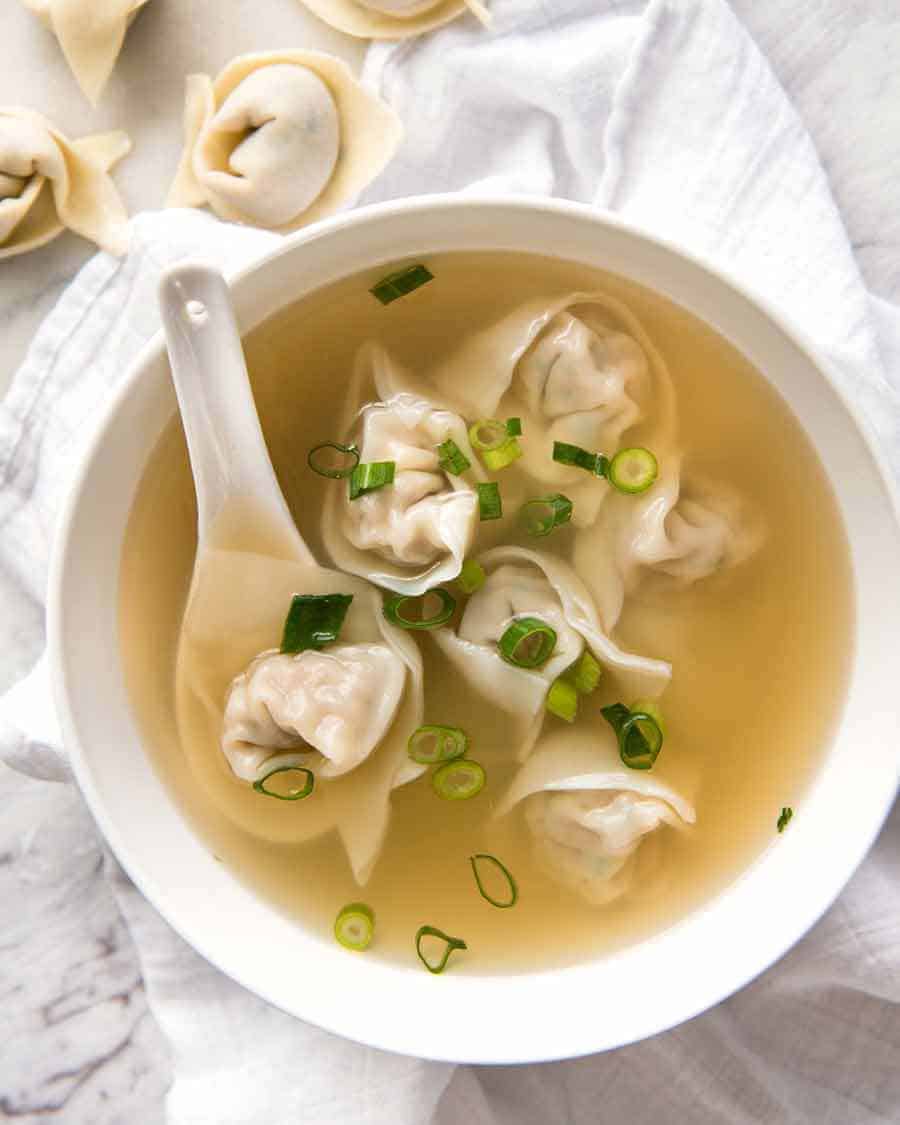 Wonton Soup
WATCH HOW TO MAKE IT

Sometimes it helps to have a visual – so watch me make this wonton recipe! 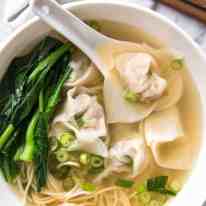 1. You can sub with 1 tbsp + 1 tsp all purpose soy sauce. 2. I highly recommend using Chinese wine per recipe, or sub with sherry, cooking sake or Mirin. If you cannot consume alcohol, then just omit. 3. This sounds like a lot, but trust me, it tastes incredible! 4. You can find Wonton Wrappers in the refrigerator section of Woolworths and Coles in Australia in the section where fresh noodles are sold (usually next to the pasta). You will need 2 packets (there are 40 in each pack). Or otherwise reduce the filling slightly and just make 1 packet. 5. If you are at the Asian store, grab a couple of cans of Asian chicken broth. It's more yellow and tastes a little "cleaner" than Western store bought chicken broth. It is what I used in the photos. 6. Smash garlic cloves by pressing the side of the knife down on the side so they burst open but mostly stay whole. It allows the flavour to infuse into the soup while making it easy to pick out of the broth before serving so you have a clean broth without bits of garlic in it. 7. I use 6 to 8 wontons for soups without noodles, and 5 or 6 with noodles. 8. I use these Asian egg noodles from Woolworths in Australia. Any dried or fresh egg noodles will work fine. 9. When I'm feeling really lazy, I cook the wontons in the soup broth. Just be aware that it will suck up some of the broth so add 1/2 cup of water. 10. The filling for the wontons are from this Wonton Soup recipe by Omnivore's Cookbook, a fantastic authentic Chinese food blog. It is better than my mother's!! 11. IMPORTANT: Do not freeze if you make this with prawn meat that was frozen - you should not refreeze raw seafood. Use all pork. Or if you really have to have prawns in your wontons, cook them very lightly in a skillet until they are JUST cooked (still opaque, not solid white), then chop them finely with a knife (i.e. almost mince them). Mash up the pork per recipe, then at the end just stir the prawns in - scrape any juices on cutting board in as well. 12. Wonton Soup nutrition per serving, with bok choy, no noodles. If you add egg noodles, it increases to 347 calories per serving. Make it even healthier by adding more vegetables - just blanch them in the soup broth.
Nutrition Facts
Wonton Soup
Amount Per Serving (280 g)
Calories 234 Calories from Fat 58
% Daily Value*
Fat 6.4g10%
Saturated Fat 1.3g8%
Polyunsaturated Fat 5.1g
Cholesterol 80mg27%
Sodium 932mg41%
Carbohydrates 25g8%
Fiber 1.2g5%
Sugar 1.8g2%
Protein 17.5g35%
* Percent Daily Values are based on a 2000 calorie diet.
This wonton recipe was originally published in September 2016. Updated for housekeeping matters in 2018 - no change to recipe!

Little impromptu home video I put together of Dozer with the gang at the beach!

END_OF_DOCUMENT_TOKEN_TO_BE_REPLACED 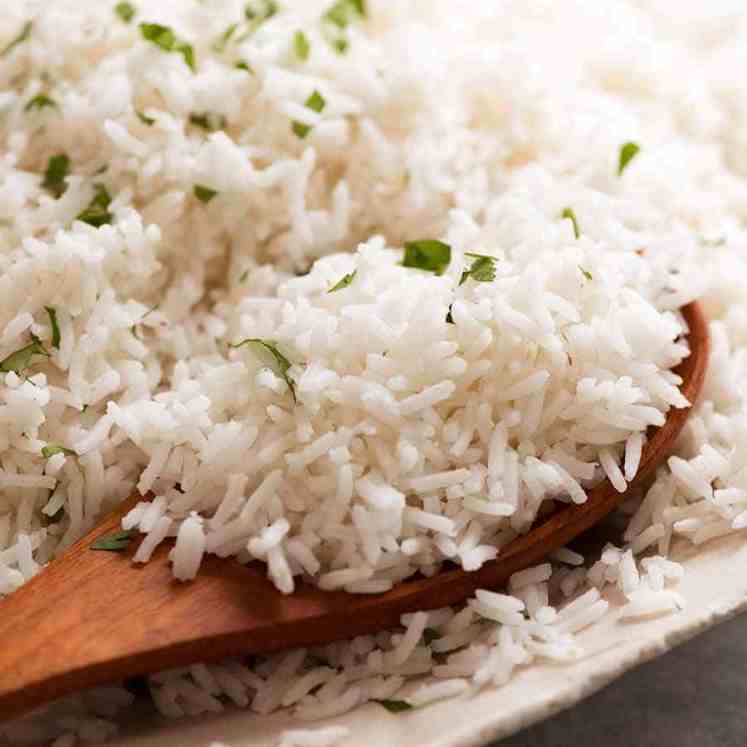 How to cook Basmati Rice

END_OF_DOCUMENT_TOKEN_TO_BE_REPLACED

I believe you can make great food with everyday ingredients even if you’re short on time and cost conscious. You just need to cook clever and get creative! END_OF_DOCUMENT_TOKEN_TO_BE_REPLACED