Apple cider is the secret ingredient that makes the most incredible moist pork tenderloin! The marinade does double duty as an incredible glaze / sauce, which means few ingredients are required to make this Apple Cider Glazed Pork Tenderloin that’s worthy of a posh dinner party! 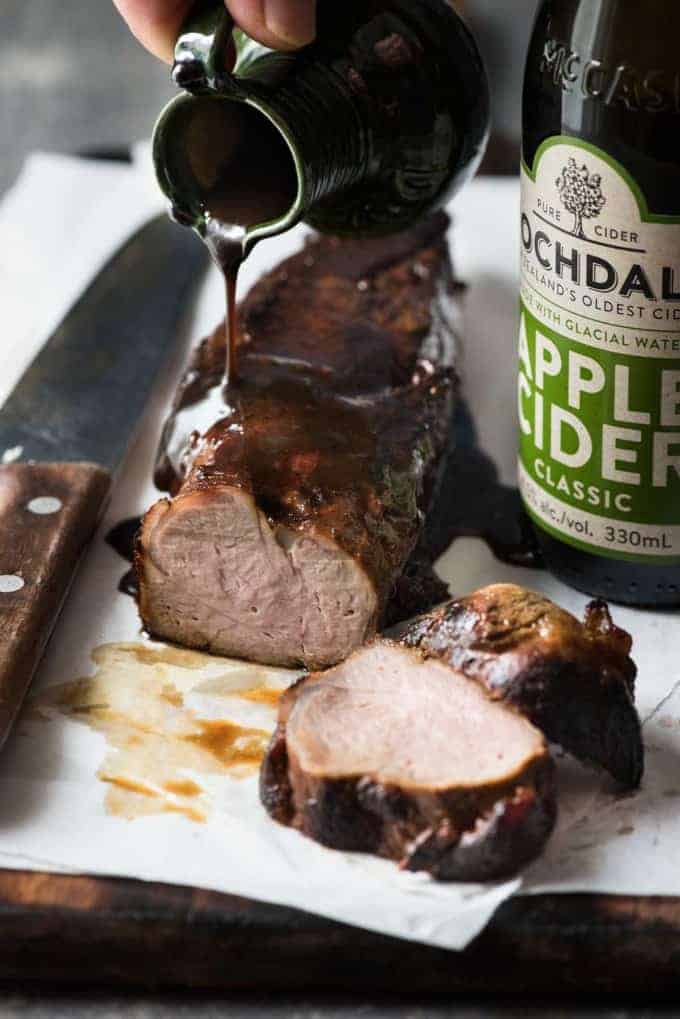 Have you ever used apple cider as a marinade before? It’s like a secret weapon broth / stock. Because it’s got so many more layers than just plain apple juice or even broth, which means you don’t need many other ingredients to create incredible flavour!

It’s like using beer in cooking but easier, because unlike beer, cider doesn’t have wheat undertones that needs to be cooked out. Apple cider tastes much cleaner and a bit sweet, but not overly so, it’s very crisp. 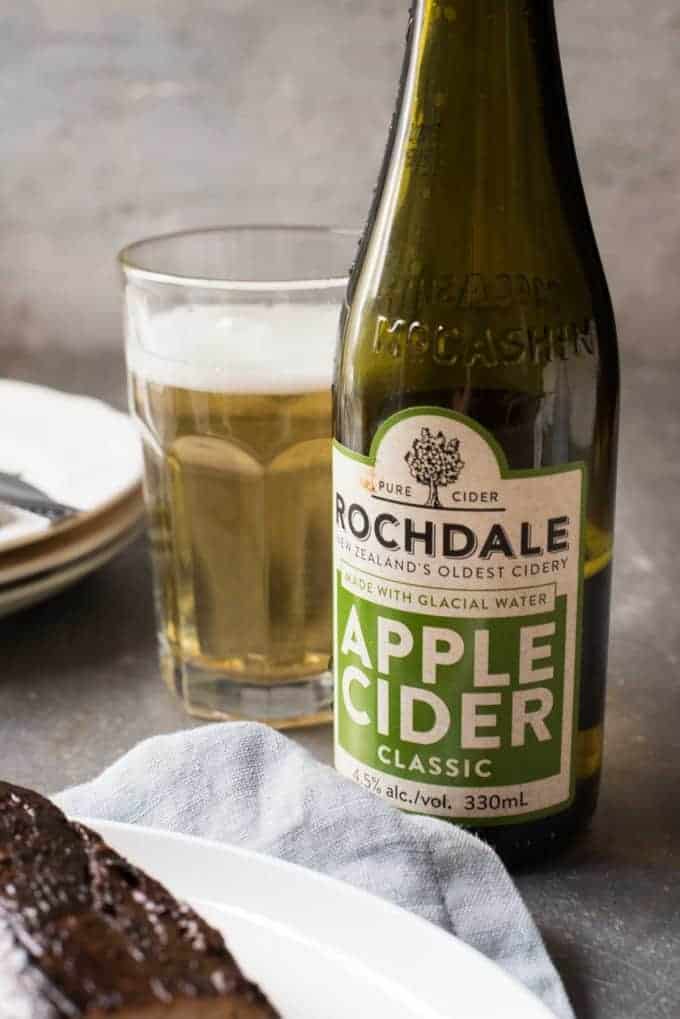 I used Rochdale Apple Cider in my recipe. I feel very honoured that they asked me to sample their cider and if I liked it, to create a recipe using it. I was quite interested to read about how it is made. It’s so pure – made with just apple juice, pure New Zealand glacial water, and yeast. That’s it! Seriously!

No preservatives! It’s GLUTEN-FREE!!! This is a big plus for me because one of my regular taste-tester friends is gluten free. 🙂

So I kicked back and sipped on a chilled bottle of Rochdale cider, contemplating what I could make. And came up with the idea to use it as a marinade….

But in all seriousness, check out how juicy this pork is! Pork tenderloin is notoriously hard to cook so it’s nice and juicy because it’s so lean. But when you brine / marinade pork tenderloin in apple cider….woah! I was amazed at the juices that squeezed out of it as I sliced it!!

Here – see for yourself! 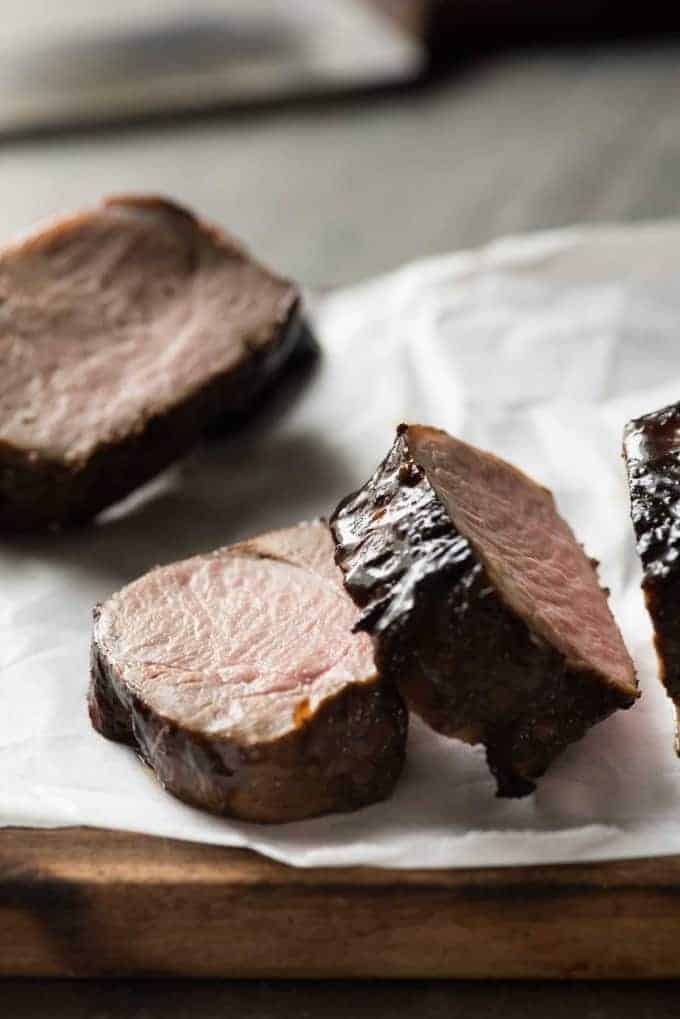 Rochdale Apple Cider. Cook with it. Drink it. The best kind of ingredient there is!!

It was after 12pm when I took these photos. Hence TOTALLY acceptable to have a sip….or two….ok, I finished the bottle. Don’t judge me. 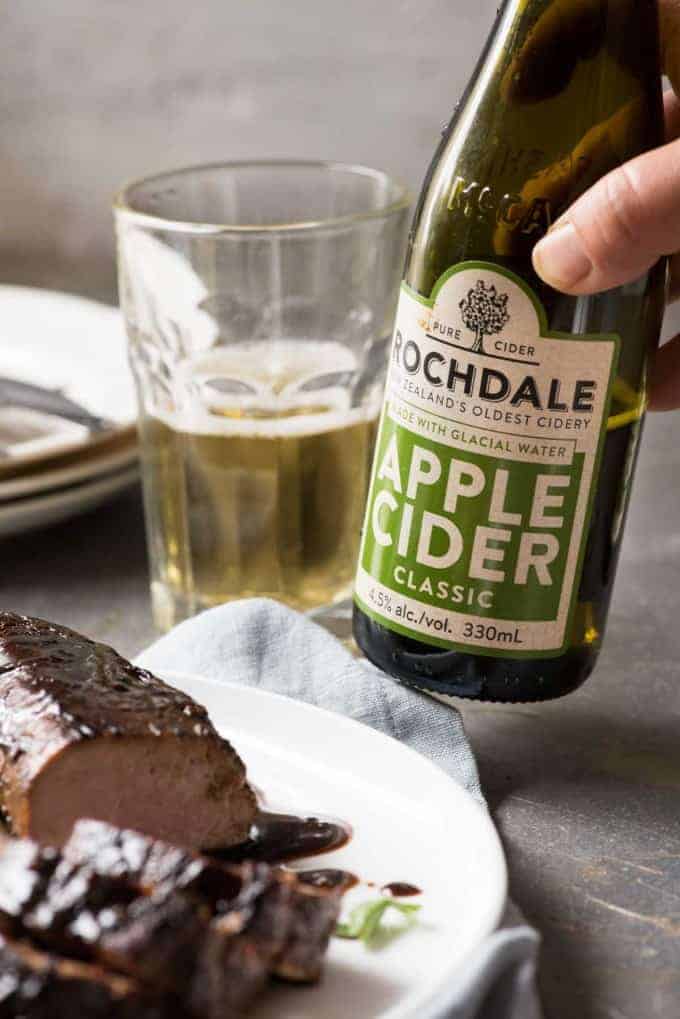 I served this with an Apple & Fennel salad because apple and pork are great mates, and fennel and pork are lovers. So I figured I couldn’t go wrong.

I really do think this is a dish worthy of a dinner party.

But you tell me – what do you think? If this was served up to you at a dinner, would you be pleased? 😉 -Nagi x 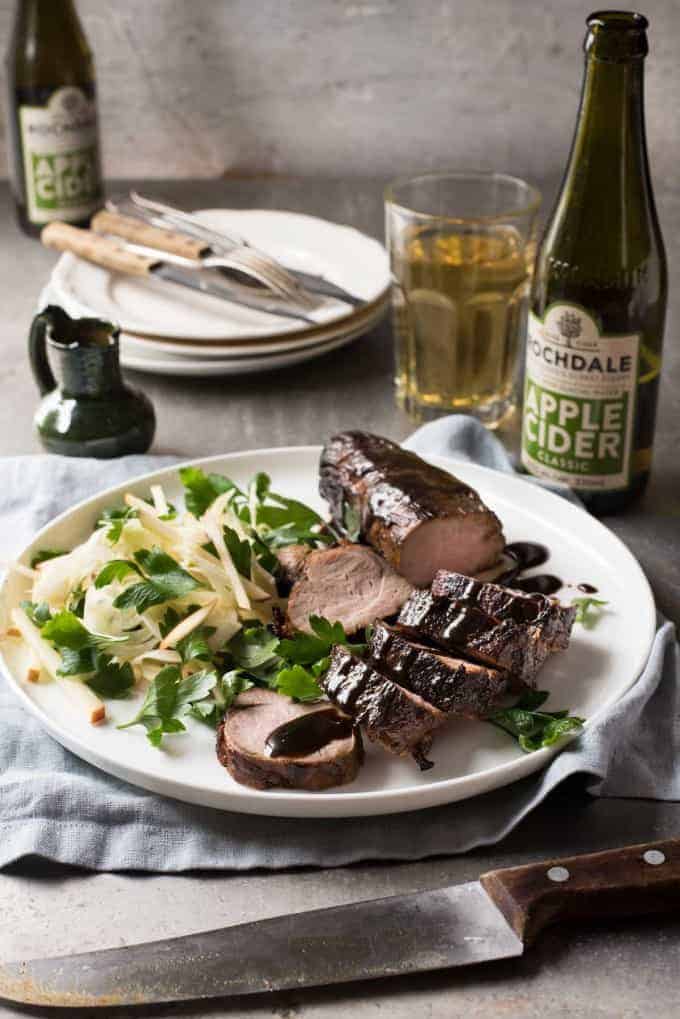 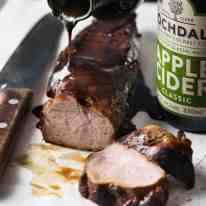 Author: Nagi | RecipeTin Eats
Prep: 5 mins
Cook: 30 mins
Total: 35 mins
Dinner
Western
4.93 from 14 votes
Servings4
Tap or hover to scale
Print
Apple cider is the secret to a marinade that makes pork tenderloin incredibly moist with a gorgeous glaze! The marinade also does double duty as the sauce. You will be amazed at the incredible flavour in this with so few ingredients! I used Rochdale Apple Cider for this recipe - a New Zealand cider that is available at all major liquor outlets in Australia including Dan Murphy's and Liquorland.

1. This recipe calls for alcoholic apple cider. I used New Zealand Rochdale Apple Cider. To make this non alcoholic, you will need more ingredients! But you can use any sweet alcoholic apple (or pear) cider you want! To make it non alcoholic, in place of the apple cider in this recipe, use the following: 1 cup apple juice + 1 tsp apple cider vinegar + 2 tsp sugar + 1/4 cup chicken broth/stock. 2. Don't let it burn because otherwise you'll end up with charred bits in your sauce! 3. I really recommend using a meat thermometer to ensure you cook the pork perfectly. BUT if you don't have one, pierce the pork in the middle and when the juices run clear, it is done. 4. Fennel and apple are classic pairings with pork! Fennel Apple Salad - use a mandolin to finely slice 1 large or 2 baby fennels. Cut 1 red apple into thin batons. Toss with lemon juice, olive oil, salt and pepper and a good handful of fresh parsley leaves. 5. Nutrition per serving, assuming 3 servings and all the sauce is used. 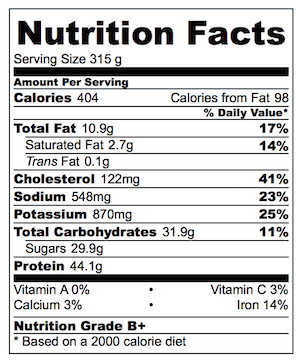 Serving: 315gCalories: 404cal (20%)
Did you make this recipe?I love hearing how you went with my recipes! Tag me on Instagram at @RecipeTinEats.

This post is sponsored by the lovely people at Rochdale Cider from New Zealand! Super crisp and clean, it’s made from glacial water which = extra clean taste. I especially love how crisp it tastes and not too sweet! Not a fan of overly sweet drinks. 🙂 N x

END_OF_DOCUMENT_TOKEN_TO_BE_REPLACED

I believe you can make great food with everyday ingredients even if you’re short on time and cost conscious. You just need to cook clever and get creative! END_OF_DOCUMENT_TOKEN_TO_BE_REPLACED