It’s the essence of summer: This is a silky and smooth Cold Corn Soup that’s creamy, sweet and utterly refreshing. It’s a soup intended to be served chilled or at room temperature, but it’s just as sensational served warm.

For the best results, use fresh corn ears when they’re at their prime (and cheapest!) But if frozen corn is all you’ve got, you can use that instead!

The concept of a cold soup might sound unusual if you’ve never tried one before. However chilled soups feature in a surprising number of cultures around the world! The best known might be gazpacho, the Spanish cold soup of pureed tomatoes and raw vegetables. But the Koreans have naengmyeon, a cold beef broth and noodle soup, while even the French sometimes serve vichyssoise (leek and potato soup) cold rather than hot.

If, on the other hand, you’re shivering through a brisk winter (hello Australia), the good news is that this soup is just as delicious served warm. It’s a soup for all seasons!!

What goes in Cold Corn Soup

A corn-centric dish is always going to taste better made from fresh corn! The other reason is we can pull maximum flavour from whole corn ears, because after cutting the kernels off the cobs are used to make a simple homemade corn stock. No store-bought stock can rival that!

2. Other ingredients in Cold Corn Soup

In addition to (lots!) of corn kernels, here are the other ingredients that go into this corn soup:

How to make Cold Corn Soup

Here’s a rundown of how to make Cold Corn Soup:

How to serve Cold Corn Soup

This is a rare soup that is intended specifically to be served cold. Serve it fully chilled straight from the fridge, just moderately cool or at room temperature.

Having said that, it’s also terrific warm as well. Warming the soup up brings the flavour of the corn out even more!

Serving this soup in shot glasses makes a fun canapé to pass around. Try serving in tea cups if making a small starter, or in bowls as a first course.

To pretty it up, sprinkle on a garnish of reserved corn kernels sautéed in a little butter until golden, and a spray of green onion slices for colour. I also added a little drizzle of extra virgin olive oil. Basil oil would have been even more amazing – imagine the splash of colour and hint of fresh basil flavour!

So, if you’re a first timer to cold soups, what do you think?? Will you give this a go? – Nagi x

PS. The correct answer to leave below is YES!! 😂 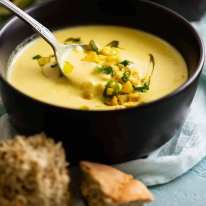 Author: Nagi
Prep: 15 mins
Cook: 45 mins
Chilling: 4 hrs
canape, Main, Starter
Western
5 from 7 votes
Servings6
Tap or hover to scale
Print
Recipe video above. Corn Soup is one of those rare soups best served cold. For all those days when it's too hot to even contemplate eating hot food!Sweet summer corn is the star here that makes a simple corn stock that drives home the corn flavour. If you can't get good fresh corn where you are, use frozen corn instead but prop the flavour up with chicken or vegetable stock.Serve cold as a canape in shot glasses, tea cups as a starter, or bowls as a meal. Serves 6 as a meal.

1. Corn – Or 10 cups frozen corn, and instead of making corn stock, simmer the soup with 2 litres of low sodium chicken stock instead. 2. Sachet alternatives – Using a sachet allows us to infuse the soup with the herb and spice flavours without ending up with dark specks in the otherwise nearly pure-white soup. If you don’t have cheesecloth to make a sachet (what, you mean you haven’t tried Palak Paneer yet? 😂), then do as follows: Put bay leaf and thyme into soup, and 1/8 tsp coriander powder plus use ground white pepper instead of black (so you don’t end up with black bits in the soup). Remove bay leaf and thyme stem before blending. 3. Storage – Refrigerate for up to 5 days.  4. Nutrition per serving, assuming 6 servings.

Photo from the Golden Retriever Boarder from the weekend while I was in Tasmania. This is how he’s been starting every morning! Enjoying the sunrise, Dozer??

END_OF_DOCUMENT_TOKEN_TO_BE_REPLACED

I believe you can make great food with everyday ingredients even if you’re short on time and cost conscious. You just need to cook clever and get creative! END_OF_DOCUMENT_TOKEN_TO_BE_REPLACED