Sticky balsamic chicken drumsticks made on the stove with just 5 ingredients – chicken, soy sauce, balsamic vinegar, sugar and garlic. It’s twice as fast as baking drumsticks and glaze is lip smackingly delicious! Watch the cooking video to see how easy it is – and how hopeful Dozer looks that one will come his way… 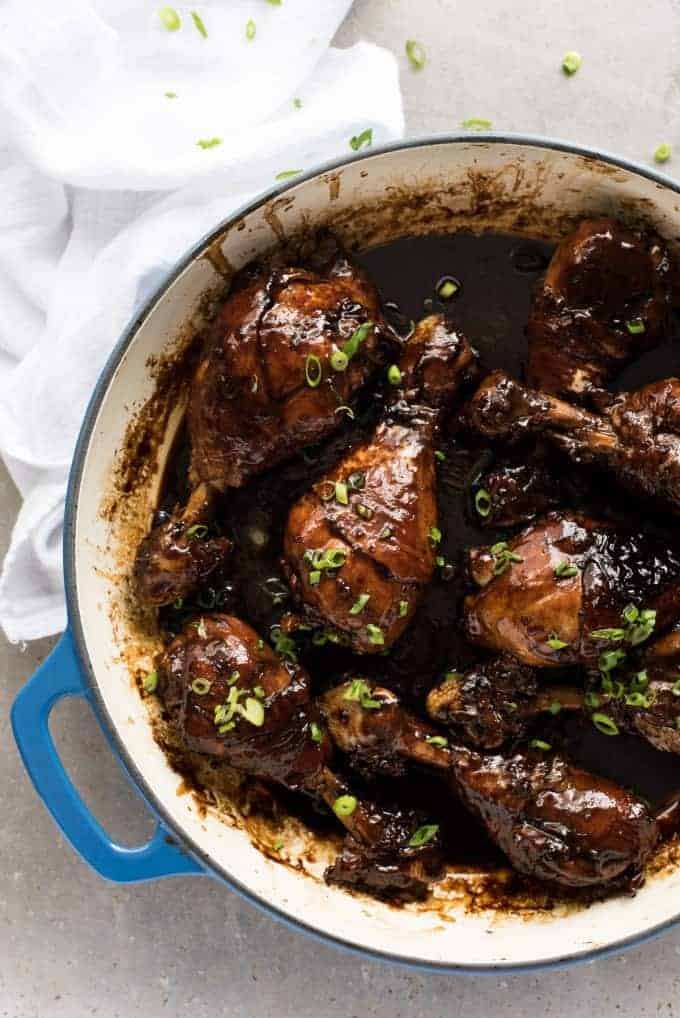 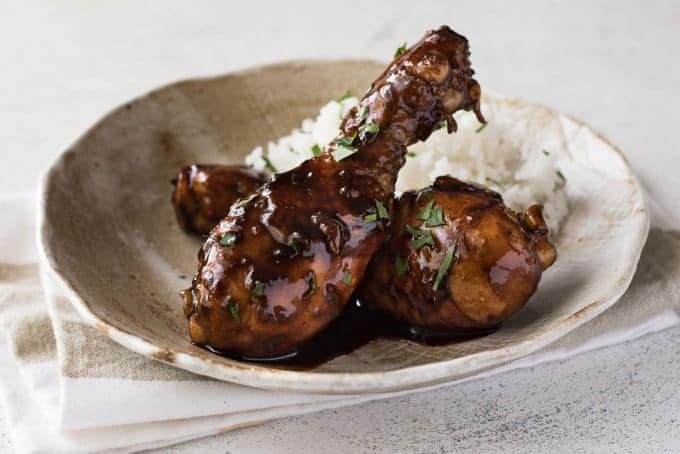 I take it very personally when people have trouble making a recipe of mine. I take a great deal of care writing and testing recipes before I share them, and you would probably be horrified at the number of beautiful photos I have trashed because I wasn’t happy with the recipe, or because I thought the “fail” risk was too high.

I posted this Balsamic Drumsticks recipe back in April 2015 and a handful of readers have had trouble with it. Specifically, getting the sauce to reduce down to a glaze. It’s not a technically difficult recipe, but it is unique because drumsticks are not usually cooked the stove in a braising liquid that transforms into a glaze and there are a couple of specific steps required to be followed to make this happen.

So I decided to repost this recipe with fresh new photos, even more concise steps and a cooking video. So you can see exactly how to make it. 🙂

These balsamic chicken drumsticks are based on this Sticky Stovetop Chicken recipe that I stumbled across. When I read the recipe, I thought it sounded quite similar to the flavour and method used for Filipino Chicken Adobo (one of my favourite Asian chicken recipes!), except that it is made with drumsticks (and with less ingredients).

This recipe is actually quite genius. I don’t think most people would think to cook drumsticks on the stove, and even if you did, getting a beautiful caramelisation and the glaze is another matter altogether.

I bet most people would never guess it wasn’t baked. Or that there’s only 5 ingredients in this. FIVE.

It’s a fairly classic sweet-sour taste made with a bit of sugar, balsamic and soy sauce. But then you add some water into the pot with the chicken and sauce so by the time the chicken is cooked, the braising liquid reduces down to a thick sticky glaze. And that glaze caramelises which adds even more flavour.

Yummy! Look at it. This is what it looks like straight off the stove. 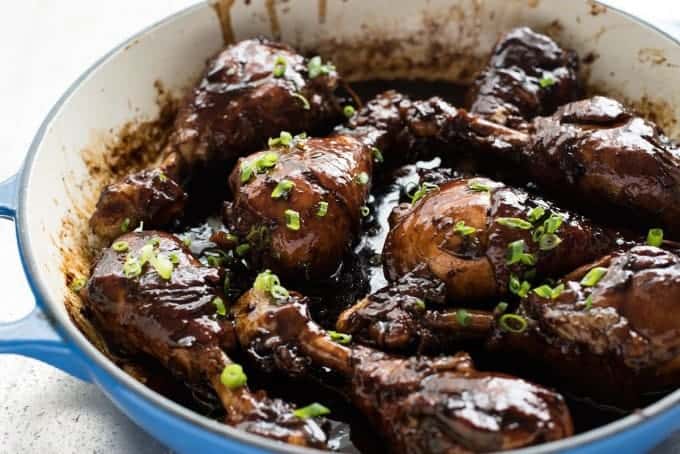 I remember the first time I made this recipe, I took a bite and thought “Ew, this is terrible”. I stood over the stove with my hands on my hips, head cocked, wondering how I was going to salvage it. I thought back over the recipe. I mean, it only has 5 ingredients in it. And there were rave reviews by people who had tried it. Either all those people have terrible taste in food….or….I stuffed up.

Yep, you guessed it. I stuffed up a 5 ingredient recipe. FIVE INGREDIENTS and I managed to accidentally leave out the most important one – soy sauce.

I managed to salvage my embarrassing disaster by taking out the drumsticks and remaking the glaze. And because the salvaged version was so tasty that I thought I had better make it again. I gave myself a big pat on the back for remembering all five ingredients the second time!

Now this is a classic back-pocket recipe of mine.

Sticky chicken – done – with less than 5 minutes of active effort. Can’t ask for much more than that! 🙂 – Nagi x 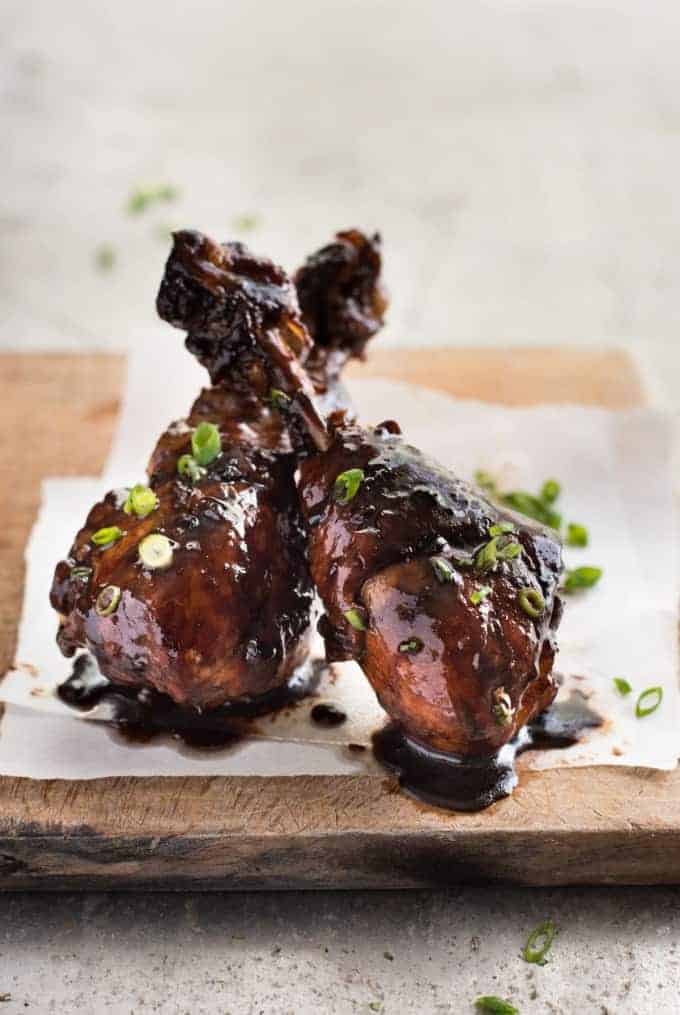 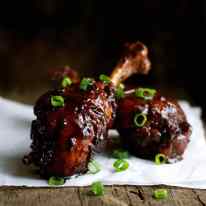 Author: Nagi | RecipeTin Eats
Prep: 5 mins
Cook: 25 mins
Total: 30 mins
Dinner, Stove Top
4.92 from 79 votes
Servings4
Tap or hover to scale
Print
Sticky chicken drumsticks that are cooked on the stove in half the time it takes to bake! Don't let the short list of ingredients fool you - the glaze tastes like it has a lot more in it. Adapted from this Sticky Stove Top Chicken recipe from Sparks People. This recipe is NOT suited for scaling up because the glaze will not thicken. Watch the cooking video (in post) to see exactly how this is made - in particular, watch the braising liquid transform into the sticky glaze!

1. This recipe will work with boneless thigh fillets and chicken wings. Take the chicken out when cooked (boneless thigh - around 15 minutes, wings - around 15 minutes) and leave the sauce to reduce down to a glaze, then return the chicken to the pan to coat in the glaze. Bone-in thighs will also work - use the same cook times as drumsticks. If you make this with breast fillets, you won't achieve the same sticky glaze (because you need fat to create glaze). If you want to make this with breast fillets, I recommend adding 3 tbsp of oil into the liquid to help a glaze form. 2. You can use any chili, fresh or dried, or hot sauce to add heat to your taste. 3. You need to use a large pan or pot for this recipe. Large enough so the drumsticks fit in one layer but not too squished together otherwise the liquid will never reduce and the drumsticks won't be submerged in the liquid enough to cook. Even though only about 1/4 of the drumsticks is submerged in the liquid, the bubbles from simmering + turning the chicken is enough to cook the drumsticks. 4. The purpose of this step is to allow the sauce to reduce. The cook time required to reduce the sauce will differ depending on the size of your pan, drumsticks and strength of the stove. The sauce is ready when it coats the chicken. 5. This is the nutrition per drumstick. BUT note that the calories is overstated because a lot of the chicken skin fat renders out during cooking and mixes in with the glaze. And only around 1/4 of the glaze coats the chicken. 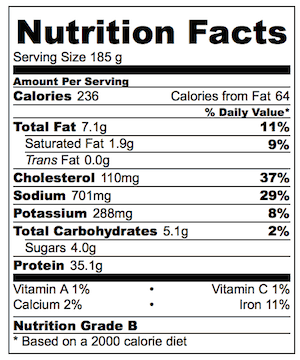 Serving: 185gCalories: 236cal (12%)
Did you make this recipe?I love hearing how you went with my recipes! Tag me on Instagram at @RecipeTinEats.

* Originally posted in April 2015. Reposted with new photos and a cooking video.

If you want your daily dose of Dozer, you’ll need to watch the video! He makes a cameo appearance…. 😉

And I just can’t believe it….people mocked me over his robe that I shared at the bottom of the Caramel Slice recipe. “Dogs don’t wear clothes!”, they declared. Boo to them!

END_OF_DOCUMENT_TOKEN_TO_BE_REPLACED

I believe you can make great food with everyday ingredients even if you’re short on time and cost conscious. You just need to cook clever and get creative! END_OF_DOCUMENT_TOKEN_TO_BE_REPLACED