Honey Soy Chicken is a sweet, salty, sticky chicken dinner that’s incredible quick to prepare. Mix up a simple honey sauce sauce, pour over chicken and bake. You’ll be a rockstar when you serve up this incredible sticky Baked Chicken that kids and grown ups will go nuts over! 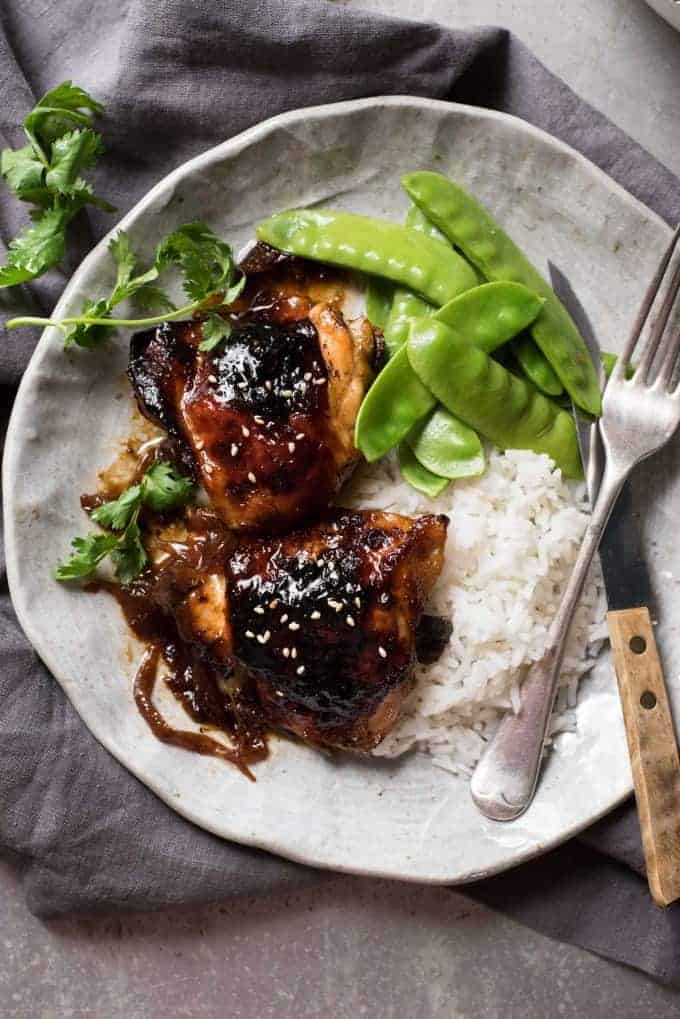 I’ve tried quite a number of honey soy chicken recipes over the years but never found a keeper. Until my friend Claire from Sprinkles and Sprouts, a fellow Australian food blogger, posted her Oven Baked Sticky Honey Soy Sesame Chicken.

I tried this recipe the day after it landed in my inbox. As soon as I took it out of the oven, I knew it was the recipe I’d been waiting for.

The glaze was perfect. Strong flavour, but there’s not an overwhelming amout of it – just enough to coat the chicken which is all you need. And it’s because the glaze has such great flavour that you don’t even need to marinate the chicken.

Just throw a handful of ingredients in a pan, bake it, and this is what you get. 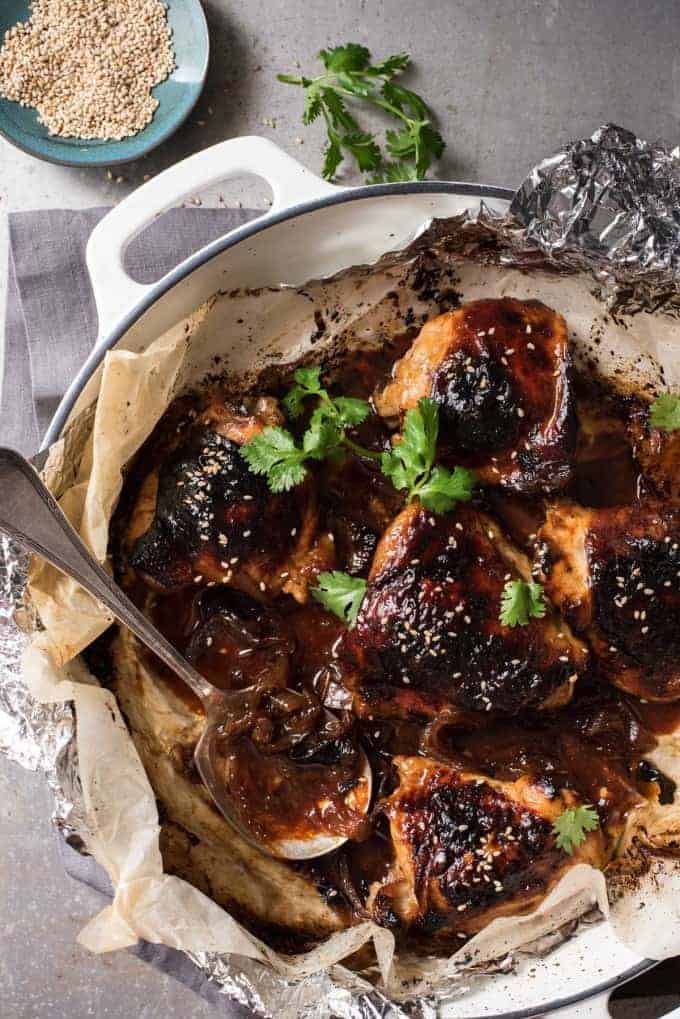 One key tip that she emphasises that I made the mistake of ignoring the first time – line the baking dish with foil AND baking paper (parchment paper)! This is a jammy glaze we have here, and if you just use baking paper, you’ll be suffering through a serious scrubbing session like I did!

I learnt my lesson the hard way – never again! 🙂

Before I sign off, I want to share some of my favorites from Sprinkles & Sprouts. Claire’s food is very similar to mine – fuss free food with big flavours, everyday ingredients, with a focus on dinners. We both agree that potatoes are one of the greatest foods on this planet and are yet to come across a way with potatoes we don’t like. In fact, Claire is so obsessed with potatoes that she’s created an entire Potato recipe collection! (Psst! Her Smashed Crispy Potatoes are so good I included them in my latest feature in Super Food Ideas magazine!)

MY PICKS FROM SPRINKLES & SPROUTS 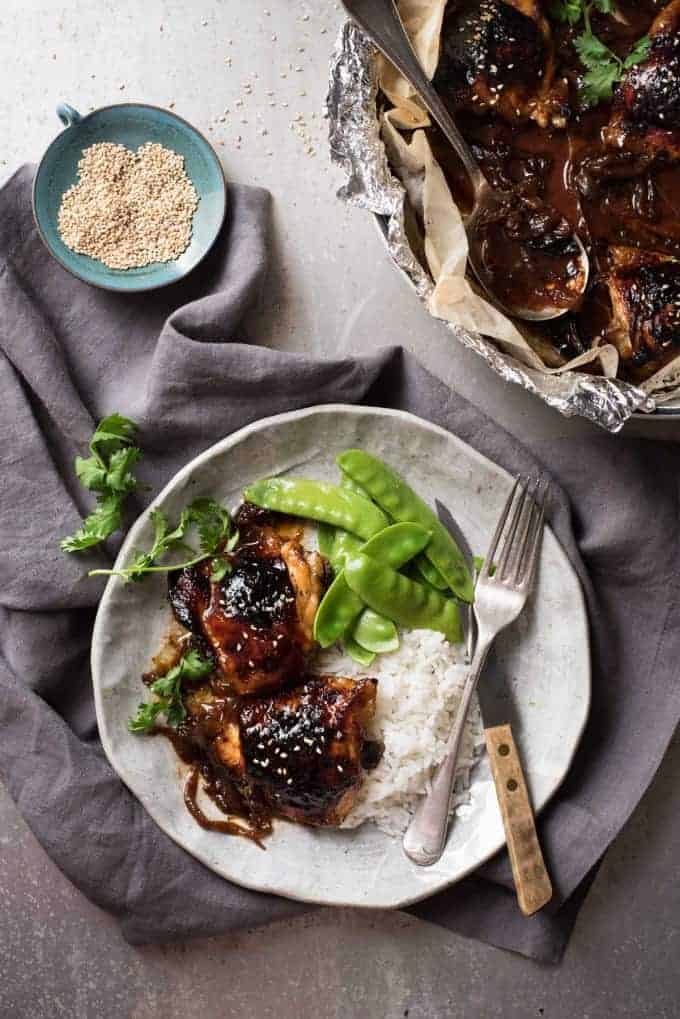 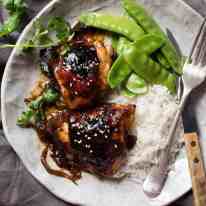 Author: Nagi | RecipeTin Eats
Prep: 5 mins
Cook: 50 mins
Total: 55 mins
Chicken, Dinner
Asian influence
4.92 from 23 votes
Servings6
Tap or hover to scale
Print
This is the best, EASIEST sticky honey soy chicken recipe I have come across, ever. And I've tried many over the years! It's a recipe by Claire from Sprinkles & Sprouts, a fellow Australian blogger. The sauce is very thin when you put it together and gets even thinner while baking, but miraculously, it suddenly thickens into an incredible glaze to squidge the chicken in. It's salty and sweet with a lovely hit of sesame.

1. This recipe requires ordinary, all purpose soy sauce. Not light or dark or sweet soy sauce (check the label, if it has any of these words on it, it's not suited to this recipe!). I use Kikkoman soy sauce. 2. I've made this recipe quite a number of times using various cuts of chicken and using different baking dishes. Using a baking tray didn't work because the glaze dried out too much because there is too much space between the chicken. Using a very small baking dish where I had to squeeze the chicken in didn't work either because there was not enough space between the chicken to allow the Glaze to reduce and thicken. It is safer to make this in a smaller rather than large pan, then if the Glaze hasn't reduced enough at the end, take the chicken out and put the pan back in the oven, it should thicken very quickly. Then return the chicken to the pan and roll in the Glaze. This works very well with skinless boneless chicken thigh fillets, though I like my glaze really thick so I took the chicken out at about 40 minutes then returned the dish to the oven for 5 or so minutes to reduce the glaze. It doesn't work as well with drumsticks because the shape of them restricts the ability to coat into the Glaze, and also they aren't as juicy as thigh so the glaze dried out too much. 3. This recipe doesn't make stacks of sauce, which is the way it is supposed to be because it is quite strong in flavour. It reduce to a jammy sticky glaze, enough to coat the chicken. That's all you need! 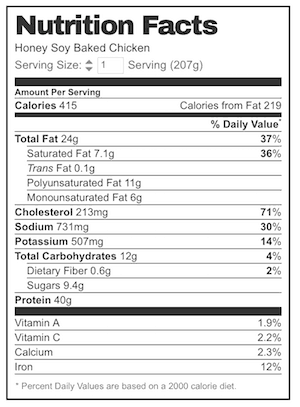 Serving: 207gCalories: 415kcal (21%)
Keywords: Baked chicken, honey soy chicken
Did you make this recipe?I love hearing how you went with my recipes! Tag me on Instagram at @RecipeTinEats.

END_OF_DOCUMENT_TOKEN_TO_BE_REPLACED

I believe you can make great food with everyday ingredients even if you’re short on time and cost conscious. You just need to cook clever and get creative! END_OF_DOCUMENT_TOKEN_TO_BE_REPLACED