Party food you can make ahead, freeze and can even be reheated in the microwave! Every piece of bread you pull out of Pull Apart Pizza Bread is like a mini pizza! 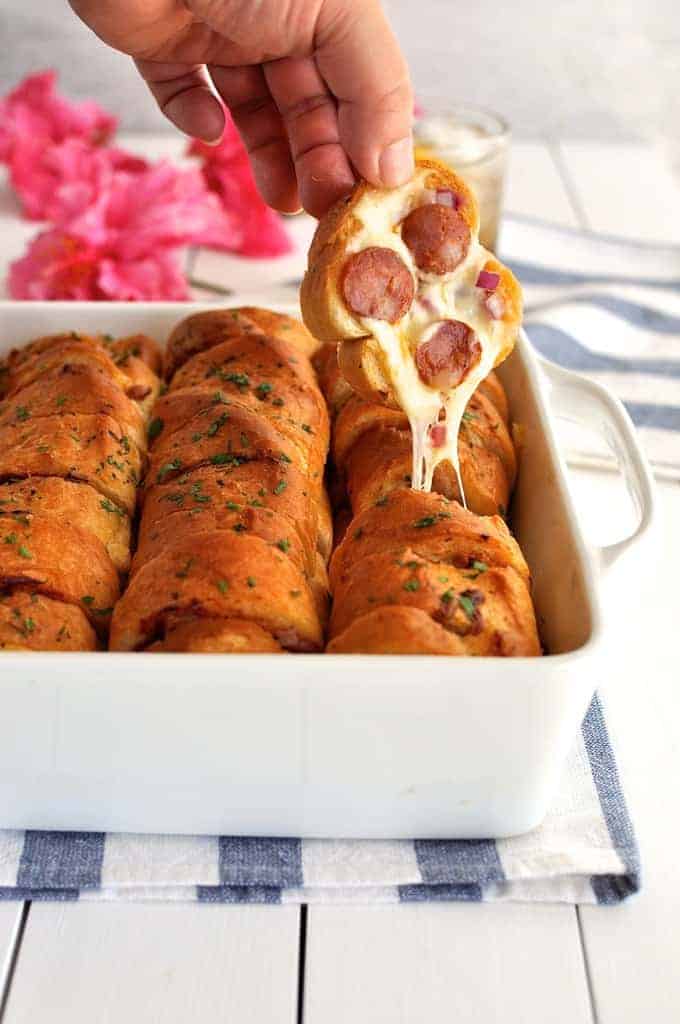 Have you ever seen such small, pudgy hands on a fully grown person? Well, I say “fully grown” but I must admit I’m rather vertically challenged. I like to say I’ve been standing in a hole since I was 7. 🙂

Having “Baby Hands” (which is what my friends call me!) is the bane of my life as a food blogger because I love doing “action shots”. I make a conscious effort to try to position my fingers to make them look more elongated in photos (I sort of stretch them out, and I try to get a flattering light on them), but sometimes I’m too flustered to remember.

Like capturing this stretchy cheese shot while the cheese was still warm.

So there you have it. My Baby Hands on full display for you to see and have a giggle over.

“Every piece of bread you pull out is like a mini pizza!”

I seriously considered calling this Crack Bread #2. Because it was inspired by my Cheese and Garlic Crack Bread (“Crack Bread”) and is almost as addictive. I say almost, because I consider Crack Bread to be the original and the best!

Actually, the idea for this pizza version came about from a reader who asked if they could add pizza sauce to Crack Bread. I said it could definitely be done but thought it might be a bit hard to spread the sauce into all the cracks. Another reader suggested using a squeezer bottle which is a great idea!

I considered making a pizza version of Crack Bread but the concern I had was that because the bread used for Crack Bread is a full size loaf, the “cracks” are quite deep so most of the cheese and pepperoni would slide to the bottom.

Don’t get me wrong. It would still be delicious! But I thought that using baguettes / french sticks would be a little more practical for a pizza version. Every piece of bread is like a mini pizza! 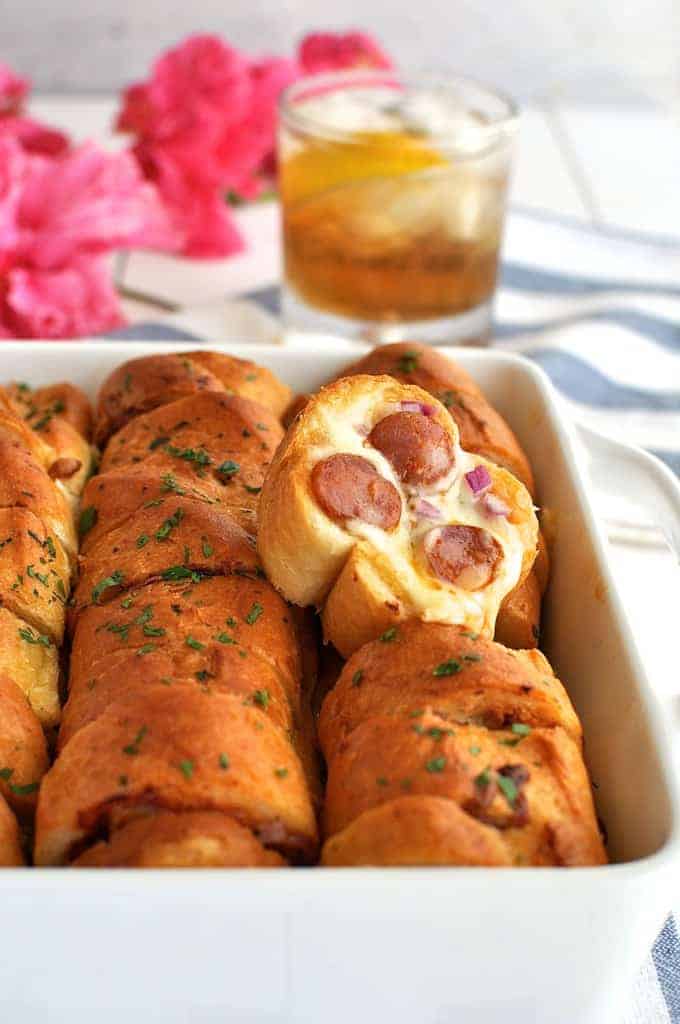 As with Crack Bread, this reheats really well, not just in the oven, but also in the microwave! The crust stays nice and crunchy because it gets a thick crunchy crust when it is baked. A key tip is to make sure that you don’t swap out the mozzarella cheese. Because mozzarella re-melts well, unlike many other cheeses.

It looks innocent enough when you first pull it out of the oven…. 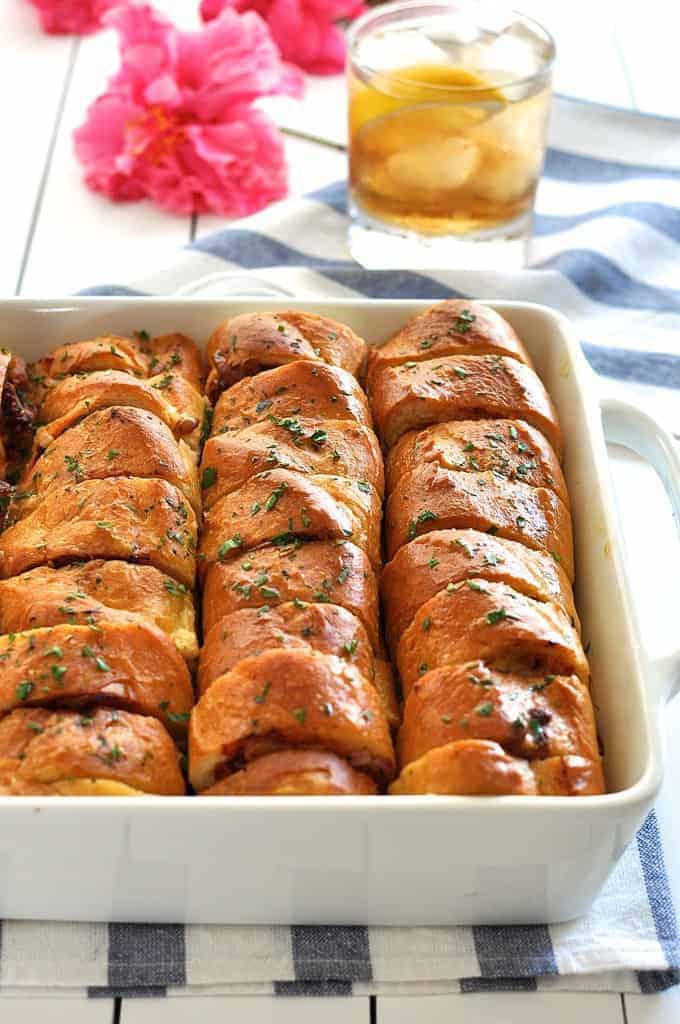 ….until you start getting stuck into it! (And there you go, my Baby Hands again. Go on, have another giggle!). 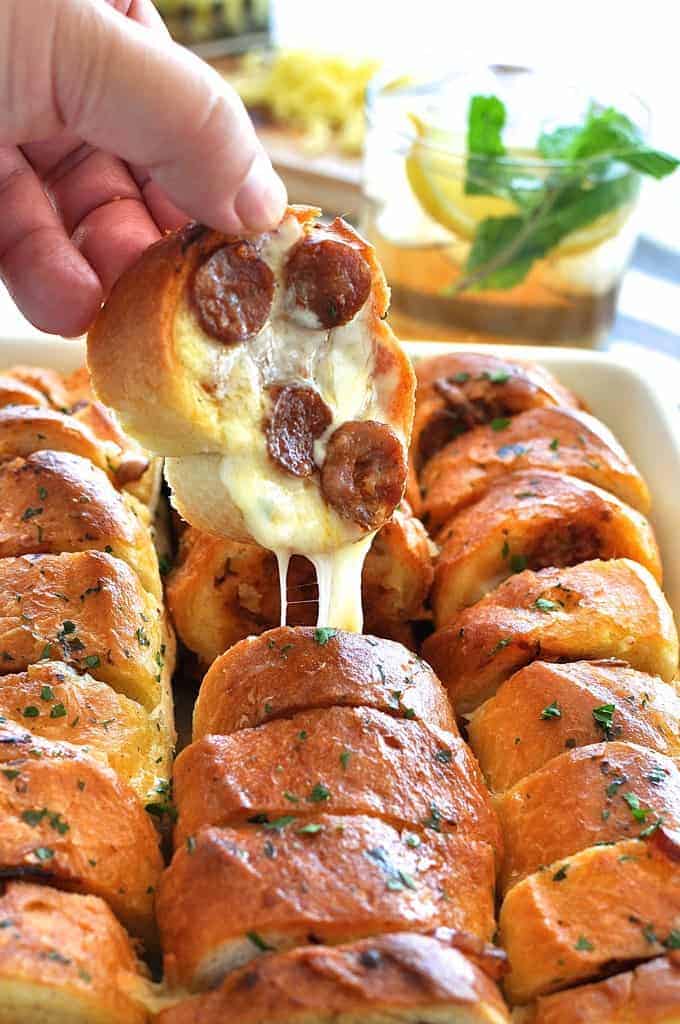 If Crack Bread is the head-honcho of the crack bread family, then this Pizza Pull Apart Bread must be his son!

So what do you think of Crack Bread‘s son? How does he compare to the original??

PS I made this bread numerous times to try to come up with the “best” way. I’ve included my thoughts on each way I tried below the recipe. 🙂 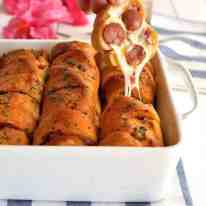 Author: Nagi | RecipeTin Eats
Prep: 15 mins
Cook: 30 mins
Total: 45 mins
Party Food
4.77 from 21 votes
Servings8
Tap or hover to scale
Print
Party food you can make ahead, freeze and can even be reheated in the microwave without it going soggy! Every piece of bread you pull out is like a mini pizza!

1. You can substitute the mozzarella for any melting cheese of your choice but mozzarella gives the best "stretch". Provolone Dolce is pretty good for stretch too. If you are planning to reheat again after baking, or are expecting leftovers (unlikely!), then I suggest sticking with mozzarella because it remelts quite well. 2. I tried this with sliced and grated cheese. Grated works better - sliced tends to slide to the bottom when it melts and doesn't distribute as well on each slice (also more calories!). 3. Fitting the bread in the baking dish snugly is key for ensuring the cheese and pepperoni don't slide to the bottom while baking. 4. This can be frozen (2 months) or refrigerated (3 days) before or after baking. If it is uncooked, then follow the recipe directions to bake in the oven (thaw first, or add 5 to 10 minutes to the baking time). If you have refrigerated or frozen a baked one (i.e. cheese is melted), then you can reheat it in the oven (wrap in foil) or in the microwave (it does not go soggy because it has a thick crust on it). 5. If you bake it, then after it has cooled and set, you can remove it from the dish (use a spatula) and wrap it in foil. It holds together quite well when reheated so it is transportable without the baking dish. 5. Nutrition per serving. 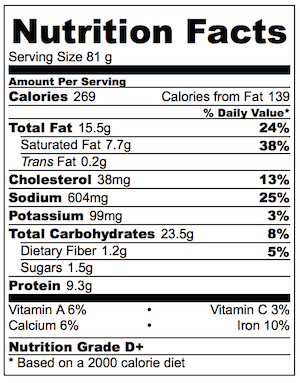 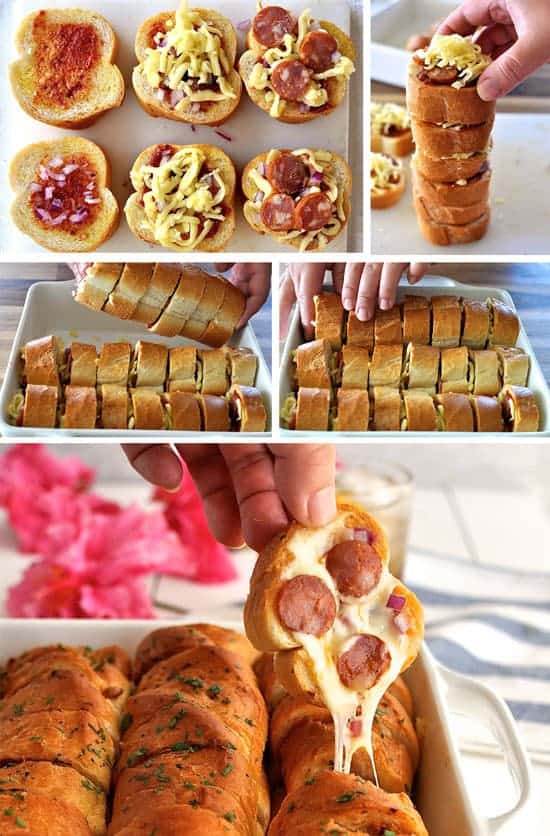 Ways I tried making this:

END_OF_DOCUMENT_TOKEN_TO_BE_REPLACED

I believe you can make great food with everyday ingredients even if you’re short on time and cost conscious. You just need to cook clever and get creative! END_OF_DOCUMENT_TOKEN_TO_BE_REPLACED